The Shining Wiki
Register
Don't have an account?
Sign In
Advertisement
in: Characters, Females, Ghosts,
and 2 more

Alexie and Alexa Grady refer to the two girls in blue Danny Torrance sees while riding in the Overlook Hotel's West Wing.

The girls are first mentioned by Stuart Ullman saying that ten years before Jack Torrance was hired, his predecessor Delbert Grady lived at the hotel with his wife and two daughters. In a fit of rage, Mr. Grady murdered Mrs. Grady along with the two girls. The police chalked it up to an extreme case of cabin fever.

On the last day of work for the regular staff, the Torrances arrive. Danny is amusing himself in the game room, playing darts, when the girls walk in. Without saying a word, they then depart.

The girls are seen much later in the movie when Danny is riding his Big Wheels around the hotel's halls. Upon reaching a dead end of the corridor, the girls appear holding hands. They invite Danny to "come and play with us" and be friends forever. Danny then has visions of murdered, bloody corpses of the girls (the same spot where they died) and hides his face in his hands. The girls vanish. Danny then remembers "what Mr. Halloran said; it is like pictures in a book, and unreal."

Speculation is that the girls are not twins. While they mirror each other, remember that anachronistically, a lot of families dressed their offspring in similar, matching fashions. Also, their dresses are designed to be different and one is up higher than the other. One also appears to be slightly taller. While Stanley Kubrick may have cast a real set of twins (Lisa and Louise Burns) in the role, note that they have been intentionally made to look differently.

Also, Stuart Ullman, in the Kubrick movie, describes Grady's two little girls as 8 and 10, when he tells the story of Grady's breakdown to Jack at the beginning of the movie.

The Grady twins in the hallway. 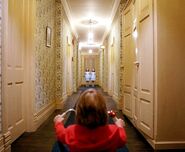 The girls dead.
Community content is available under CC-BY-SA unless otherwise noted.
Advertisement