The Shining Wiki
Register
Don't have an account?
Sign In
Advertisement
in: Locations, The Overlook Hotel, The Lobby

The Lobby is the grand front entrance in the Overlook Hotel. It possesses the reception area and leads to both The Gold Room and The Colorado Lounge.

The lobby is the first area you come across when entering the hotel.

The lobby is based on the similarly themed lobby of the Ahwahnee Hotel.

The Lobby, as told to Jack Torrance by Stuart Ullman, is described as follows: "Now. Lobby level: Here in the center is the registration desk. Behind it are the offices. The lobby runs for eighty feet in either direction from the desk. Over here in the west wing is the Overlook Dining Room and the Colorado Lounge. The banquet and ballroom facility is in the east wing. Questions?"

Maps of the Lobby[] 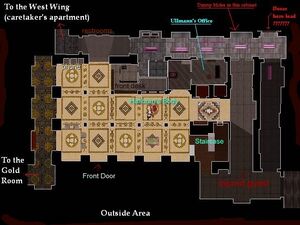 Map of the Lobby created as a level for the computer game Duke Nukem. 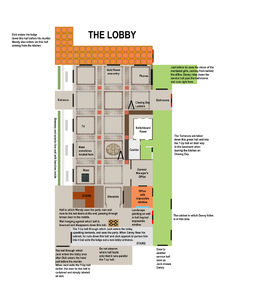 Map of the Lobby by Room 237 contributor Juli Kearns. 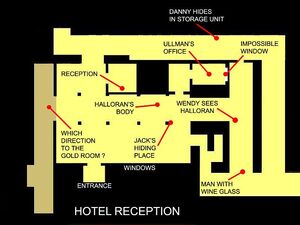 Map of the Lobby by film analysis and producer Rob Ager.

The lobby was filmed on Stage 4 at Elstree Studios.

Community content is available under CC-BY-SA unless otherwise noted.
Advertisement