The Shining Wiki
Register
Don't have an account?
Sign In
Advertisement
in: Locations, The Overlook Hotel, The Red Hallway, The Shining (film)

The Red Hallway was a blood-red colored hallway found in the Overlook Hotel in the 1980 Stanley Kubrick film The Shining. It is only seen once in the movie, and the location is never given, although theories state that the green service hallway was re-purposed into the Red Hallway.

The location of the Red Hallway is never given. However, due to the stacked green tables and chairs, it can be assumed to be located in close proximity to the Gold Room. It is also revealed to be connected to the Elevator of Blood hallway.

The Red Hallway is a corridor characterized by its blood-red walls and is presumably a staff-only corridor, as unused and spare green tables and chairs line the length of it. The hallway starts with a turn, which is then interrupted by an area that shares similarities to the lobby The Lobby before continuing straight. Unlike the other hallways shown throughout the film, the Red Hallway features wall-mounted candle lights, as opposed to the fluorescent tubes mounted onto the roof that is shown in almost all other hallway scenes.

The hallway is depicted as having a connection with the Elevator of Blood hallway through an entrance to the left in the middle of the corridor, as it isn't shown whether the hallway continues or ends at the opening. The Elevator of Blood Hallway creates a great contrast to that of the Red Hallway, instead featuring characteristics of areas in and around the lobby.

Unlike many other areas throughout the film, the Red Hallway only appears once, for a few brief seconds. During the climax, Wendy Torrance can be seen running down the hallway, wielding a knife. Following this, she slows down her pace, entering the Elevator of Blood Hallway during which she sees blood pouring out of it. Much to her disbelief and shock. Following this, the area is never shown again.

The scene was shot at Elstree Studios in Hertfordshire, England at some point in 1979. Analysis of the scene suggests that the green service hallway was re-purposed into the Red Hallway, or vice-versa. These theories state that the general layout of the hallway, such as wall alcoves, vents and the roof design are the same in both hallways. This would also explain the fact that the Elevator of Blood Hallway is designed similarly to the lobby out of a filmmaking perspective, as it is right next to it. It is unknown if the Red Hallway scene was shot before the scenes involving the green service hallway. However, as most of the movie was shot in consecutive order, it would most likely make sense that the scenes with the Red Hallway were shot after, as scenes involving the green service corridors are never seen after that.

Analyses of the hallway[] 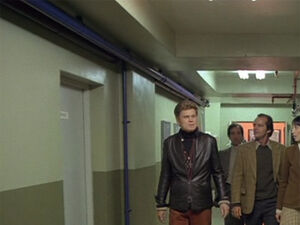 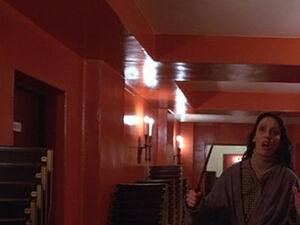 The same location in the Red Hallway, revealing the re-purposing.

Community content is available under CC-BY-SA unless otherwise noted.
Advertisement